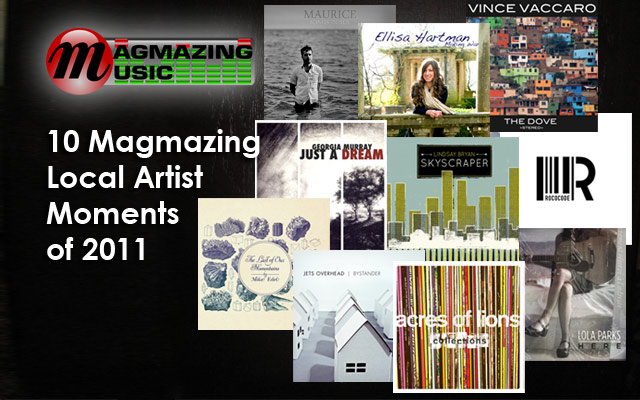 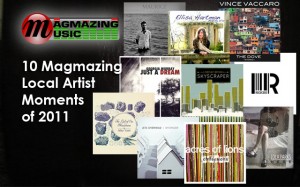 Victoria and Vancouver Island have become rich in music talent in the last couple years. You only need to listen to the radio to hear a growing number of local artists gaining high rotation. Once you dive into the local scene you then discover how tight knit the community is. You get to know a handful of artists only to find out they’re friends with another group of musicians.

Here are my 10 favourite local moments of the year that I captured on video. You can take them as 10 reasons to check out more local artists’ gigs where you live.

I pretty much discovered Georgia Murray’s music while going through the Rifflandia 2011 lineup. I came across the Green Couch Sessions video of her performing ‘Won’t Get in The Way’ and from that moment I put her on my must see list for the festival… and then she had to back out of Rifflandia because she was selected as a finalist in CBC’s Cover Me Canada music reality show. Now, I didn’t really follow the tv show very closely, but did watch videos posted to YouTube and was really impressed with her cover of Alanis Morissette’s ‘You Oughta Know.’ So when The Zone@91.3 had her as a guest performer for their Offic Hero promotion, I jumped at the chance to finally see her peform live. This video of her covering ‘You Oughta Know’ would have been ranked higher on this list if I had done a better job with audio recording in what was a somewhat challenging venue.

This was the first time I’ve ever been asked to shoot a single take music video. It was definitely a learning experience for me in a technical stand point. I discovered the limitations of my camcorder and my audio recording gear. Wind noise, some other audio gremlins and the steadiness of my shot are things I’ve since made efforts to improve. But this moment gets on my list because the shoot was just fun to do. Ellisa was great to work with and the songs shot sounded fantastic in person.

I’ve seen Mike Edel perform multiple times. I have yet to see him have a bad show. I had a tough time picking what video moment of Mike feature because there was a bunch of moments I really liked. His performance of ‘Westmont’ and ‘Two of us’ (featuring Stephanie Macpherson) at Rifflandia were two options. But this video of him performing ‘Two of Us’ with Lindsay Bryan at his ‘Last of Our Mountains’ CD release party gets the nod. The lighting at Lucky Bar just looked so good on this video plus the audience was just so engaged.

Co-worker friends and I have known Lola Parks (aka Sandy Powlik) from her days as a waitress at Smith’s Pub when we’d go for burger/beer night on Wednesdays. I knew she was an aspiring singer and listened to her music on MySpace, but never got to see her perform live until she performed a solo acoustic set in Centennial Square one August afternoon. After that I knew I had to see her perform with a full band at some point. That opportunity came at Rifflandia 2011 and it was wonderful. The Wood Hall at the Victoria Conservatory of Music is a surprisingly nice intimate venue for a band performance and translates well in this video. ‘Trouble With Me’ is also a very catchy song that gets stuck in your head.

It’s been a year of transition for JP Maurice. From releasing the band’s Big Country EP last November to going solo and nabbing a coveted spot in the Top 20 of the Peak Performance Project, to releasing his latest album ‘Songs in Sea’ this passed October. I was glad to be able to see the full band perform one more time in February when they opened for Jets Overhead at the McPherson Playhouse where they ended their set with a song that was a hit on The Zone@91.3, ‘Robin.’

Acres of Lions had a pretty stellar year in 2011. They made the Top 5 in this year’s Peak Performance Project… ‘Reaction’ was a hit on the radio… and the ‘Collections’ album was well received. This video of ‘Reaction’ I shot at their CD Release Party at Sugar Nightclub was such a relief for me as a concert videographer. I’ve recorded the band a few times before and each time either the venue just didn’t do the band justice or I didn’t have the right equipment with me to really capture their performance properly. This time at Sugar though, everything was the way it should always be. Good crowd, good venue, good sound.

If I had to name one band new to me that really caught my attention in 2011 it was Rococode. The first time I ever saw the band perform was in March when they opened for Mother Mother at Alix Goolden Hall. They were so good I ended up seeing them 3 more times this year. Once when they opened for The Zola’s at Club 9One9, at Rifflandia 2011 and at a house concert at my friend’s place… And this is a band that still doesn’t have an album for sale yet. Technically most of the band live in Vancouver now, but most of them have roots in Victoria. This is my favourite video I shot of them this year mainly because of the angle I managed to shoot from and the exposure was just right.

Jets Overhead performed four brand new songs at Rifflandia 2011. I shot three of them. This one is my favourite. I guess I like it’s because it’s a more up tempo song. A bit of a change of pace from other songs from the band. If the four new songs they performed were any indication of what the new album they’re currently recording is going to have, it’s going to be pretty damn good.

I was part of the organizing group for the TEDx Mile Zero event in Victoria back in September. I was mainly responsible a bunch of the technical stuff and shooting/editing the speakers at the event. Vince Vaccaro was a guest performer and he played three songs acoustically and talked between each song. I haven’t had the opportunity to edit a multi-camera shoot for a long time and through a lot of frustration dealing with some technical issues I’m pretty proud of how this video turned out. It’s definitely not how my concert vids usually look. Vince as usual performed an awesome heart felt performance. One of the top highlights of the TEDx Mile Zero event by far. On a side note, I was part of a jury that voted in the Rock category for the 2011 Times Colonist Music Awards. Vince was voted #1.

This was the first time I’d ever seen Lindsay Bryan perform with a full band. The first couple times I saw her perform live it was mainly acoustic sets. This performance at Lucky Bar opening at Mike Edel’s CD release party solidified Lindsay as one of my favourite local singer/songwriters. Her Skyscraper EP is one of my go-to albums to listen to if things get too quiet when I’m at work. I chose this video of ‘Mud Puddles’ because it was was the first song she performed that night and from the moment the drums kicked in and the first few lyrics were sung you just knew it’d be a great performance. Its also another example of Lucky Bar’s back lighting making the video look really good.

So there’s my ten favourite local artist moments of 2011. There were a ton of other moments from other great local acts. Just go through my YouTube Channel and you’ll find some great stuff. If you enjoy any of the moments I featured go buy their EPs and albums and check out their shows at a venue near you. Some of their music you can even download for free! Happy New Year everyone! Bring on the concerts of 2012!