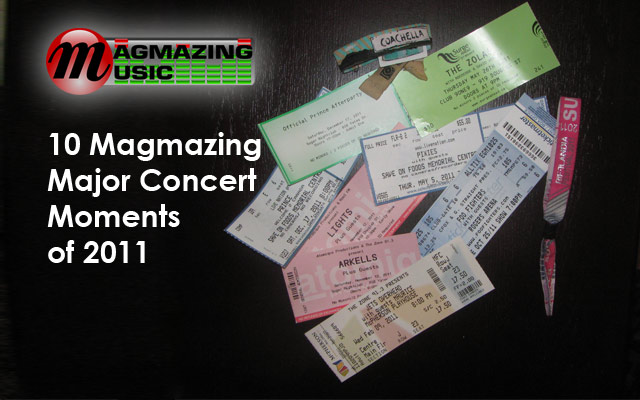 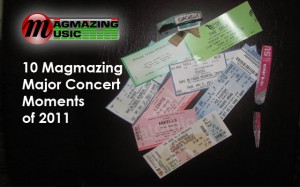 2011 has been a pretty incredible year in my concert recording life. It was the first full year I’ve had the proper gear to record pretty much every single show I’ve been to. The result? More than 400 videos posted to YouTube and hundreds of gigabytes of video and audio files filling my hard drives. I’ve recorded so much I was barely able to keep up. In fact I haven’t even finished uploading videos from Rifflandia and a couple local shows from the last couple months. I also haven’t had time to author dvds for friends for Christmas this year. Which reminds me, I should really get on making some dvds.

Anyway, I originally thought of compiling a my top ten favourite videos I’ve shot this year to one blog post, but choosing JUST TEN videos out of the 400+ I have posted was too difficult, especially if I want to include some awesome local talent from my home town. So what I’m going to do is list my Top Ten Local Artist Moments and my Top Ten Major Concert Moments of 2011…. Or “Magmazing Moments” if you will.

So let’s get to it. This is my Ten Magmazing Major Concert Moments of 2011.

Back in January I predicted City and Colour and Gord Downie would be part of the Coachella 2011 lineup. City and Colour had performed a sold out show at The El Ray Theatre and Gord Downie was the opening act. Selling out at that venue has historically been a precursor to being offered a slot at Coachella. When the lineup was announced and both were listed I was excited.

Ever since Sleeping Sickness came out, I’ve dreamed of seeing it performed live with both Dallas Green and Gord Downie. That dream came true at Coachella. What shocked me was that it was the very first song performed. You’ll see in the video that I was totally caught off guard. I didn’t have my camcorder on when they took the stage. Thankfully my audio recorder was rolling. My only wish is that the tall guy with the Rockstar hat wasn’t sticking out like a sore thumb. It’s the only reason why this moment isn’t higher on my list.

This was one of those concerts where I had no other plans on a Saturday night and thought, “Hey Arkells are in town. I know a couple songs. Might as well check ’em out live.” The same night Lights was performing at another venue earlier in the evening. So I went to both concerts in one night expecting good things, but ended up totally blown away by the Arkells. The sold out crowd was electric. I think it’s probably the first time I’ve shot a concert at Sugar and my shot was shaky simply because so many people were dancing that the floor was bouncing. This Hall & Oates cover video proves how fun this band was to watch.

Long before The Black Keys El Camino Album was released I got to see The Black Keys on the main stage at Coachella. While there were some sound issues during the performance (they weren’t amplified enough), seeing the band live was awesome, and I love the lighting comes across in this video of ‘Tighten Up’. It’s also my most watched Coachella video of the year.

I seriously think this is the best looking video my little Canon TX-1 digital camera has ever captured. The lighting in Club 9One9 was perfect that night. My camera’s focus was bang on and there was no noise due to low light. That’s the reason this Finger Eleven video makes my top 10 list. Oh and the concert it self was pretty damn good. This concert was literally a last minute decision for me. I bought a ticket at the door. I’m glad I did. They played a good mix of their harder stuff from years ago and more accessible new material.

The moment I love about this video comes a little after the 2:50 mark as ‘Dark Fantasy’ starts being played. Everyone’s paying attention to the stage with all the dancers waiting for Kanye to come out, and then suddenly he just gets lifted up from what seems like the middle of the crowd 20 feet away from me on a lift that has smoke shooting up in the air. I just loved that it seemed like I was one of the first to notice and was able to capture footage of him popping up and then seeing the reaction of the rest of the crowd was satisfying. Say what you will about Kanye’s ego and doucheyness, but the guy knows how to put on a show.

This video is how I wish all of my videos would turn out. Perfect audio, clear shot of the band with basically no one in my way, fantastic lighting, and one of my favourite songs. This ranks as one of my all time favourite videos to re-watch again and again. Why isn’t it ranked higher on this particular list? Well while I love the video, the moment itself isn’t a significant as the next four. Now if Feist had magically appeared to do the female vocals, this video would’ve been off the charts.

This was one of the best concerts of the year in Victoria. The backstory of how this concert even came to pass makes it even better. Local radio station The Zone@91.3 has music meetings every week where they pick any new songs to put into rotation. Here’s this song ‘Sail’ from a basically unknown band called AWOLNATION that they decide to give a shot. Shortly after putting it in rotation, phones are going crazy with requests for it. So much so, the station does everything they can to get the band to perform a show in town. That concert at the nightclub with the largest capacity sells out in minutes. Crowd ends up being into every second of the show and goes ballistic when ‘Sail’ is performed. Capturing that moment which was basically a climax to this organic build up to fame gave me chills.

Footage I shot of Cee-Lo Green aired on TMZ. What more needs to be said? Oh yeah, why I my footage got on TMZ. Cee-Lo Green was 30 minutes late for his set at Coachella 2011. He powered through a few songs in 20 minutes and after performing the infamous single ‘F**k You’ he started performing a cover of Journey’s ‘Don’t Stop Believing’ and Coachella the cut his mic. He then stormed off stage tossing his towel. A couple days after I posted the video to YouTube I get contacted by Max (the dude with the long blonde hair) saying they want my video. Providing footage to TMZ felt a bit surreal. So now I guess I can sorta say I’ve worked for TMZ. haha.

Probably my favourite overall concert of the year for me. The Foo Fighters concert was incredible from start to finish. I was torn between picking this video or the video for Everlong. I ended up picking this video due to the shocking event that happened during it. During the cover of Tom Petty’s ‘Breakdown,’ Dave Grohl jumps down from the stage and walks up into the section I’m standing in and starts dancing with a “pretty girl in the disco ball shirt” 7 feet away from me. It was just such an awesome spontaneous moment that I managed to capture on video. It probably wasn’t my best shot video in the world but I got it and made it look/sound halfway decent.

1. – Prince at Sugar Nightclub – December 17, 2011
I don’t have ANY video of this. Security at the venue was fierce. No one was even getting a photo. Even if I had managed to record video, there’s no way in hell I’d be able to share it with you. Prince is that hardcore with litigation. He has pretty much any unauthorized use of his music yanked, or the person sued. You can’t even share bootleg audio recordings anywhere because even the torrent sites are scared of what Prince would do. Even with that, seeing Prince (who I’m only really a casual fan of) perform at Sugar Nightclub at 2am was the top moment of the year. How can it not be? You have a world famous legendary musician performing at a medium sized nightclub in VICTORIA BC of all places after hours.. and only you and 300+ others are sharing the experience. It was a once-in-a-lifetime event hands down. Is there another reason this is my top moment of the year? Wellll… I’m just going to say walked out with proof I was there.