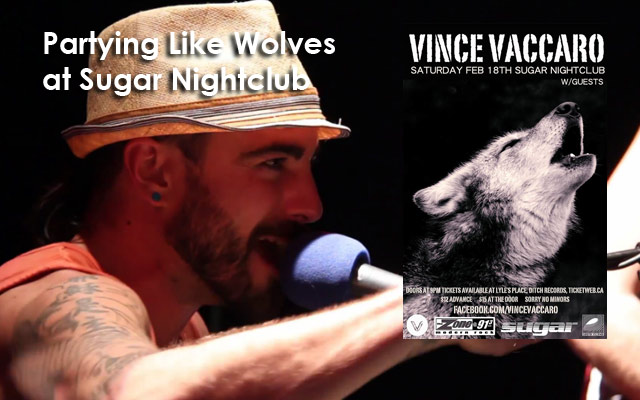 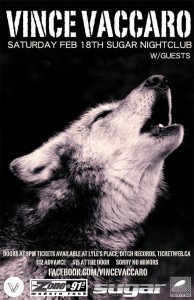 Who: Vince Vaccaro with The Electric Timber Company and Peter Gardner
When: Saturday February 18, 2012
Where: Sugar Nightclub, Victoria BC

My apologies for posting my comments about this show so late. It’s been a hectic month. On February 18th I got another opportunity to shoot another sold out Vince Vaccaro concert at Sugar Nightclub. It was one of those shows where I was given full access of the venue. What really excited me about shooting this show was that I just bought a Canon EF-S 18-200 mm F3.5-5.6 IS lens for my Canon T3i dSLR camera. Up until now I didn’t have a lens that both had enough zoom to get good closeups and wide enough to get audience in the shot if I was zoomed out. Needless to say, the new lens is darn near perfect. Also, now that I have an SLR in my roster of equipment I can use my HD camcorder as a secondary shot at certain concerts.

The biggest challenge for me has been recording audio. After damaging one of my Church Audio microphones at the Acres of Lions house concert I’ve been trying to figure out how to best record clean audio with seriously mixed results. I love my Rode Videomic, but for some reason it doesn’t seem to play well with my Edirol R-09HR recorder. For some reason the audio came out slightly distorted. Add the fact that the mic is mono, it kinda makes me want to break something because the quality isn’t up to my new standards.

As for the show itself, I think it is an early contender for best of the year. The sold out crowd was electric and the performances great. Starting off the evening was Peter Gardner, singer of local band Hawk and Steel. He performed a solo acoustic set. A highlight was a cover of Oasis’ ‘Wonderwall’ that Vince joined him on.
Check out some video of Gardner’s set including the Oasis cover by clicking here.

The second act to perform didn’t really have a band name until that night. They were originally billed as “Mike and the Romaniacs.” The night of the concert the name had changed to The Electric Timber Company. The band is a collaboration of a number of local artists, two of which are also in the band Quoia (Mike Roma and Keith Gallant). This show was the first time the band performed in front of a live audience and the pressure was definitely on with a sold out crowd in attendance. They passed the test with flying colours. Check out video of The Electric Timber Company’s set by clicking here.

Finally Vince Vaccaro performed an hour and a half headlining set. It was such a fun set to shoot I’m just going to let the video speak for itself. Here’s the entire concert for you to enjoy. My apologies for a brief bit of darkness and shaky camera work before ‘Costa Rica’. I forgot to edit footage from my second camera to cover it.

You can also view each song individually by clicking here.

Finally, here are some photos I took during soundcheck and before and during the show.