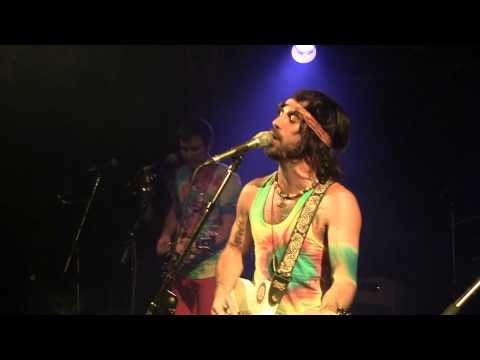 Friday night I was given the amazing opportunity to shoot Vince Vaccaro’s sold out show at Sugar Nightclub. This is the second time I’ve been in a position where I have had full freedom to move around and utilize an an indoor venue and also bring in my better video equipment. The first time was last week for Syn{a}pse’s Band of the Month performance at Rehab Nightclub. A major difference this time was there was the barricade between the stage and the audience at Sugar. I had an unobstructed vantage point and could move to just about any angle.

Vince invited me to shoot some behind the scenes footage of his band’s early sound check and shoot the live show later in the evening. Normally my style is to shoot shows from a fan’s perspective. Make the viewer feel like they were at the concert with people all around them. This time though was a chance to some real videography. I didn’t have to settle for one stationary angle. I didn’t have some tall guy blocking my shot. I didn’t have anyone screaming their head off constantly right into a mic messing with the audio record.

The only small problems with having such close shot of the band are trying to get some good wide shots without a wide angle lens… and also audio… With me freely moving around and also being positioned behind the speaker stacks, getting consistent audio was going to be an issue. This is where having full venue access and having my new audio recording rig helped out immensely. For Vince’s set I was able to access a deck where the lighting person worked and basically hung my new Church Audio mics pointing towards the speakers and just set an approximate level and recorded audio from there. I also had my Rode Videomic on my camcorder to record on my camcorder. Considering the Rode mic is a directional shotgun I was surprised how consistent the audio sounded from it. I was going from pointing it toward the band to pointing to the audience while behind the speakers and the audio sounded pretty decent.

Major lesson learned: I need some kind of sungun/video light. Going from the bright spotlights on stage to the total darkness in the crowd was a challenge with the limited exposure settings of a pro-sumer camcorder.

Anyway enough techy audio/video nerd stuff… How was the show? Mike Edel opened up the night at around 9:45 with an always solid set. I’ve seen Mike perform several times now and each time he’s performed with different people and it’s always good. Look forward to the new album when it comes out.

Next up was Dougal & The Weapon. A fun reggae band. Lead guy Dougal Bain McLean plays one of those mini guitars (don’t know their official name) which is neat to watch. This was the first time I’ve seen this band perform. I’d see them again.

Finally it was Vince’s turn on stage. This was the first time I’ve been to a Vince Vaccaro show that wasn’t an acoustic set. So I was set for a rockin’ show. You pretty much have to expect a rockin’ show when the rest of the band is everyone from Maurice… Add a guest mandolin player and trombone player and who knows what could happen on stage. The show started off with one of the songs that first got him noticed by some in ‘Heart and Hands’ followed by one of my favourites ‘Animals’… One thing I found interesting and a sign of his strength as a performer is that he performed both songs that have received major airplay on local radio in the middle of the set. Him playing ‘Catch a Fire’ and ‘Costa Rica’ in the middle of the set and the keeping the audience fully engaged showed that the capacity crowd was there for the show and not just to hear those two songs everyone now knows.

A great visual moment came during ‘Gypsy Son’ where Vince stood on the barricade and walked along it like a balance beam. Another moment during that song was when Vince was singing right in front of some girls along the barricade and there was this one blonde girl inches away from Vince just staring practically hypnotized.

Here’s some video from Vince’s set: