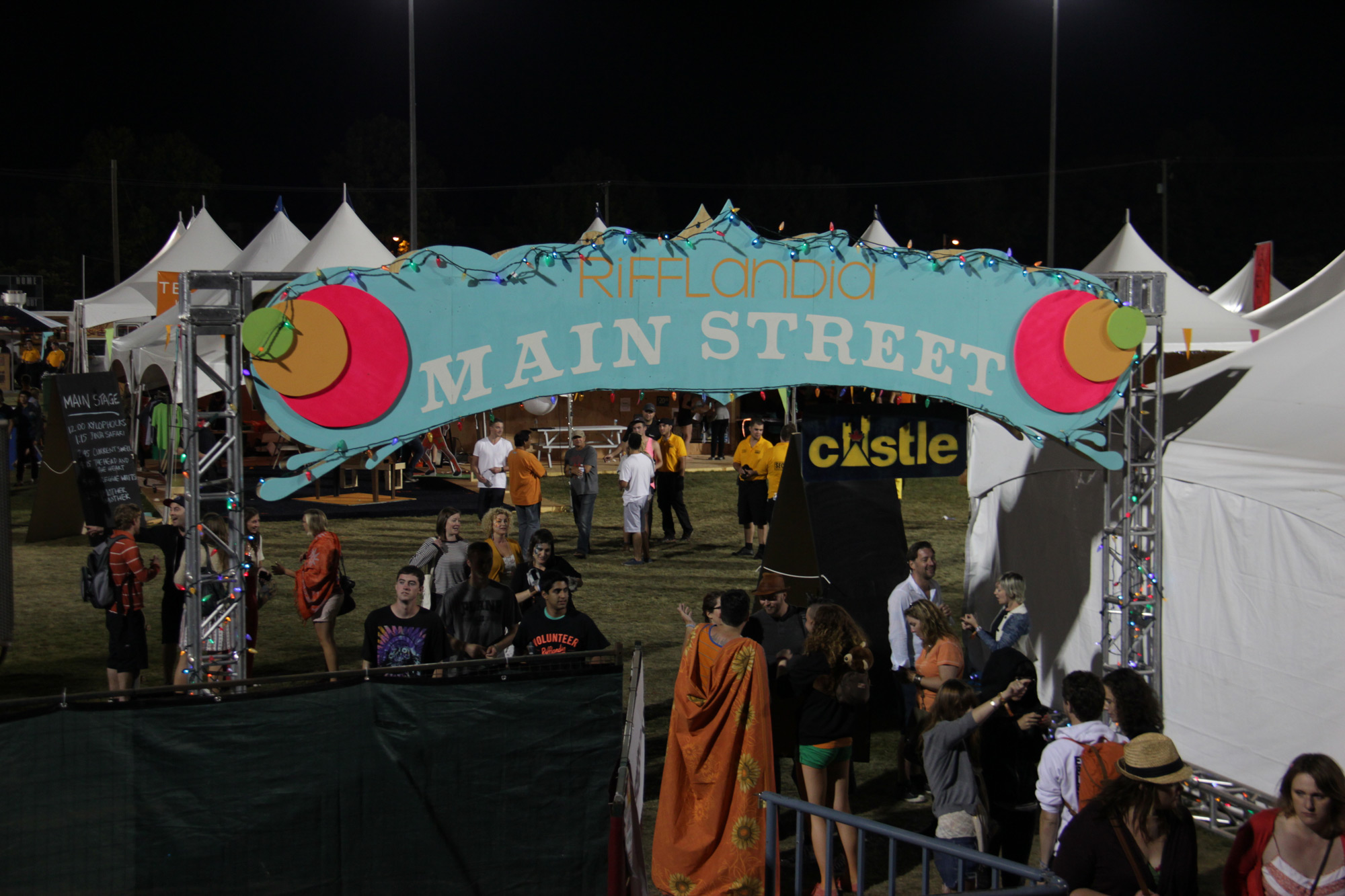 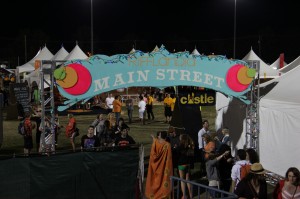 Considering how impressive Rifflandia 2011 was (read my review from last year if you need a refresher), the big question going into 2012’s festival was what more could organizers improve?

This year they increased the size of the beer garden at Royal Athletic Park so that it reached all the way to the front of the main stage, essentially splitting the main stage viewing areas into “dry” and “wet” halves. They turned the side stage into a full fledged stage on the opposite end of the field rather than a small tent in the corner. They brought back Market Square as an evening venue that just two years ago last served as the main venue. This year, with Electronic Dance Music’s popularity soaring to new heights Market Square housed some of the top DJs of the festival. They also added more art, vendors and activities within the park. Another major change was the moving of the festival dates earlier by two weeks.

So how did it go this year? Here’s my Rifflandia 2012 experience and list of observations:

1. The bigger side stage at Royal Athletic Park was a vast improvement over last year’s tent and had some of the most memorable moments of the weekend. The Stanfields put on a high energy set of east coast folk rock with a Flogging Molly vibe. The Dudes performed a crowd pleasing set full of singles. Winnipeg’s Grand Analog brought up a quirky member of the audience to dance to their track ‘Magnifico’ and Vancouver’s Hey Ocean! brought up drummer Johnny Andrew’s nephew Owen who spontaneously broke out some break dancing moves that electrified the crowd.

2. The return of Market Square was a huge success… and judging by the long lines at times, maybe a little too successful. The DJ-centric venue filled up quickly each night and was essentially an outdoor dance party all weekend. With the layout having an all ages pit up front and a beer garden area beside/behind that and then the upper level looking down at everything, it was a great venue for both dancers and observers.

3. A lot of things seemed bigger at Royal Athletic Park. Bigger stage, bigger beer garden, bigger vendor tents, more volunteers… Even The Zone@91.3’s broadcast booth was bigger with a more elaborate setup in collaboration with Wolf/Sheep Arthouse. Despite all that, there was still plenty of room to maneuver around the park. The site continued to be the cleanest concert festival field I’ve ever walked around even after tons of confetti from Rich Aucoin and the Flaming Lips the first day at the park. I never noticed anyone being unruly whenever I was in the beer garden. Once again, security’s presence was not overbearing. One change at the park I found a little ironic was that you couldn’t bring metal water bottles inside. Last year, stainless steel water bottles was part of the Rifflandia merch you could buy.

4. Walking around the city between sets at night, downtown Victoria felt more vibrant to me during the festival. Lower Johnson Street where Market Square’s entrance is located and the block where the Wood Hall, Alix Goolden Hall and the Metro Theatre sit are typically ghost towns at night, but the festival made the downtown core feel like a bustling big city with stuff happening everywhere. The lineups of people at each venue, the beats pumping from Market Square. It also helped that you couldn’t ask for better weather. Warm sun by day, but not too hat. Cool breeze at night, but not too cold. Moving the dates up by two weeks was smart.

5. After attending the festival with Media credentials, I’m not sure I’ll be able to handle going to another Rifflandia again without it. I feel extremely lucky and privileged to have received such access. I started out simply buying the Superpass wristband back in December when a special pre-sale happened. A few weeks prior to the festival, a friend won a RifflandiaTV Twitter contest that awarded a VIP wristband upgrade. He was going to be hanging out with someone without VIP for most of the festival so he passed the upgrade on to me. Days before the festival I was contacted by Rykka who wanted me to shoot video of her set at Rifflandia. After informing her that I didn’t have the credentials that would allow me to bring my good recording gear in, she got me a media wristband. With that much good karma coming my way, it would have been wrong to not pay it forward so I gave away my VIP wristband to Georgia Murray. The media wristband technically gives some access backstage, on stage and at the front photographer pit of the stages, but I never really bothered with any of it because video shooting-wise, there’s more disadvantages that advantages. The credentials allowed me to get inside busy venues and get in with my higher quality camera gear without needing to sneak anything in which made for a more relaxing experience for me.

6. I have a personal gripe with Alix Goolden Hall and I have for a very long time. While the place has some nice atmosphere and decent sight lines and large capacity, as a videographer I have a serious dislike for the lighting and the echo in the room. My experience seeing Rifflandia sets there didn’t change that opinion. The first night of Rifflandia I saw Data Romance perform there. The lighting was so dark and combined with the smoke machines you almost needed night vision glasses to even see the duo on stage, let alone try to get any video. Everything I shot turned out grainy and unwatchable despite the fact the performance was great. The festival isn’t at fault in any of this, it’s been an ongoing frustration for me every time I have seen a concert at Alix Goolden Hall. The funny thing is, the place is capable of shining a decent amount of light, but many times they choose not too for whatever reason. There was even one time this year that a group was performing at the hall and there was an adequate amount of light, but the minute I was about to hit record the band actually requested the lights to be darker. I soon left without shooting anything. My other issue is that I find the sound to be too live with echo for my taste, but I know a lot of people like that kind of sound. I don’t know how the average person feels, but as someone who’s passion is shooting high quality video and getting high quality audio, it bugs me a lot.

7. I was saddened to hear Sugar Nightclub’s renovations weren’t finished in time for Rifflandia. I was really looking forward to seeing at least one show there to see the changes to the club. Instead, shows slated for Sugar were moved to Sopranos Bar and Grill which is a much smaller venue. It’s too bad… Punk band Fucked Up would have filled Sugar. There was large line at Sopranos on the Friday night. 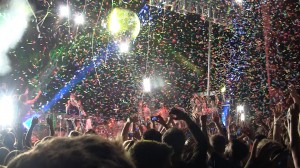 8. Rifflandia is exhausting… but oh so rewarding. If you took advantage of every minute or Rifflandia, you’d be going home at roughly 1am for three straight nights only to come back to Royal Athletic Park at 3pm on the Friday and downtown for the War Child Lounge at 11am for Saturday and Sunday. That’s a bit of a marathon. During Hey Ocean!’s set on Sunday afternoon, David Vertesi told the crowd he saw someone in the audience who had both arms in the air rocking out really hard, but yawning at the exact same time. That pretty much sums up the weekend.

Being in the sunshine at the park for 9 hours and then running from venue to venue at night, it wears you down, but you plow through because it’s nothing but fun. It’s kind of like going through a rigorous workout. You know you’re going to be hurting the next day, but you know you’re going to reap the benefits afterward. That’s Rifflandia. A musical workout that makes you a more well rounded music fan afterward.

Finally, how’s this for rewards? The Rifflandia Superpass I purchased in the special Boxing Day pre-sale was $100. Throughout Rifflandia I saw roughly 30 bands. I missed maybe another 5 I could have seen. You do the math. Roughly $3 a band? Why would you not take advantage of that? There are those who are afraid to throw down $100 without knowing the lineup. To them I say you spend anywhere from $30 to $100+ for one concert depending on the band… At Rifflandia you’re paying that $100 pre-sale price for a pool of 100+ bands you can pick and choose from for 4 days of entertainment. The lineup shouldn’t matter. There is always someone worth seeing and the acts that surprise you can make the experience even better.

I’ll end this write-up with a few thank yous. First, thank you to Nick Blasko and the Rifflandia team at Atomique Productions for organizing another successful Rifflandia. Thank you to the team at The Zone@91.3 for allowing me to store my backpack at their tent during the festival. Thank you to Mark for passing on his VIP wristband upgrade over to me. Thank you to Rykkafor the opportunity to shoot her set at Rifflandia and for obtaining media credentials for me. Finally, thank you to DJ Shadow’s manager… for reasons I won’t go into publicly on this blog… haha.

This year was a Rifflandia experience I won’t soon forget. I sacrificed hours of sleep and ended up with a sore left shoulder and right arm from holding a camera in the air all weekend long, but it was worth it. Spent time with great friends, saw great bands, and shot some of the best music festival footage and moments I’ve ever shot.