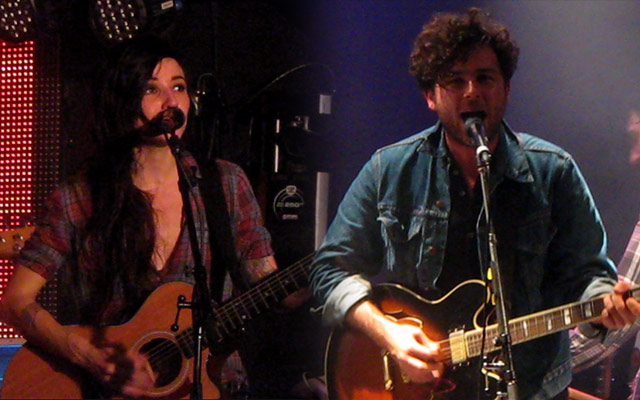 Last night I had the opportunity to see two rising talents in Canadian music that play two completely different genres and appeal to different audiences. Both rank among the better local concerts I’ve seen this year.

First up was Timmons, Ontario’s Lights. Now, a top 40 pop-rock concert isn’t something I normally attend, but a couple things led me to check out Lights. First and foremost was the fact I got free tickets. My workplace offered up some free tickets and I took advantage. It was an early show at Club 9One9 that ended by 10:30pm so I figure it was something to do and I was still able to see the other concert I had purchased a ticket for. The other reason I went to this show is that Lights didn’t seem like your typical top 40 pop star. She actually plays instruments and doesn’t rely on elaborate dance routines and back tracking. If all you knew about lights was a picture of her you’d think she was in some rock band with her raven hair, tattooed arms and plaid shirt.

I arrived at Club 9One9 at about 8pm. The opening band was already on stage. They were forgettable. Just wasn’t into them. One thing that surprised me a bit was how my guys were in the audience. I went in totally expecting to see nothing but a sea of 19 to 20-something year old girls. Instead the gender split was about 60/40 and a bunch of guys were right up front. One guy even brought a rose to give to Lights.

As for the performance, Lights put on a very entertaining hour and twenty minute set going from just singing to playing guitar, piano and some kind of synth/electronic device setup. She probably doesn’t have the most powerful voice especially considering her small frame, but she engaged her audience well and is vocally sound. It’s unfortunate that because she doesn’t have the extra power in her voice at times her vocals got a little drowned out by the band.

One of the highlights for me was when Lights performed a stripped down version of a song called ‘Heavy Rope’… Just her and a piano. It was a lull for the attention span of the ADD generation who were heavily into all the high energy tracks, but as someone who took piano for 12 years and as someone who’s a bit of a sucker for ballads I liked the change in direction. During the encore there was another direction change with rendition of her song ‘Cactus in the Valley’ that had more of a country music feel.

What really surprised me in her 17 song set was that she did not perform the two singles from her first album that launched her career. ‘February Air’ and ‘Drive My Soul’ were left out. I can understand leaving one out, but both? The audience didn’t seem to mind, except for a couple guys who screamed it out after each song of the encore ended.

From what I’ve read, after the show Lights met with fans outside and took pictures. Then again, it was probably hard to avoid with the tour bus parked right out front of the entire Strathcona Hotel complex.

As neat it would have been to talk to Lights face to face, rushing over to Sugar for the 2nd concert of the night was much more important. Saturday night at Sugar was the place to be. Hamilton, Ontario’s Arkells were headlining a sold out show. Opening for them was Rich Aucoin. I saw Rich Aucoin live last year at Rifflandia. Aucoin has a very structured set that mixes electronic music with projected images, audience participation and props including a parachute that takes people back to elementary school P.E. class. You really have to see it live to really know what the heck is going on. There’s no doubt in my mind you’ll be impressed with the guy’s showmanship. I didn’t realize that he actually has a band. At Rifflandia 2010 he was performing solo.

The audience seemed to feed off the energy of Aucoin’s performance and let it explode when Arkells took the stage. While I was shooting video of the Arkells’ set, I was standing completely still but my shot was bouncing up and down because the floor was literally bouncing up and down because so many people were jumping and dancing to the music. Note to any future bands I record… You know you’re doing a good job when I can’t put my camera down because I’m afraid to miss a moment.

The band put on a high energy 16 song set that included a cover of Hall & Oates’ ‘You Make My Dreams’ with help of Rich Aucoin and his band. This is a candidate for concert of the year for me. Highly encourage you to see them live the next time they’re in your area.

Here’s a couple videos on the YouTube channel already.