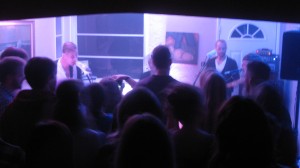 Last night I saw Rococode perform live in someone’s living room. The band completed a small series of house concerts in Victoria raising money for Habitat for Humanity. The venue was my friend Colin’ McTaggart’s home which has been the venue for a number fun house parties. Saturday was no different. The house was packed solid. Colin had the air conditioning on, but it was still hot in the room with so many people inside.

Rococode performed a solid set that included most of their small catalog of songs and also a new song that was written for the Peak Performance Project. 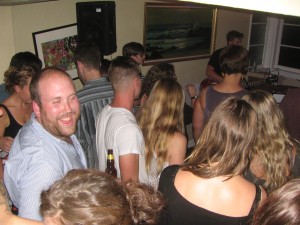 After Rococode’s set, Funktapus took played a dance party set of covers. Funktapus is a side project of most of the members of Rococode.

If you ever get invited to see a band or live at a house concert, seize the opportunity. You will not get a more intimate concert experience. First, you’re in someone’s living room. Second, you end up drinking beer with and chatting with the band.

$700 was raised for Habitat for Humanity by the end of the night.

I shot video (as always), but as you can see from the photos, my vantage point wasn’t spectacular so I might not post anything publicly.