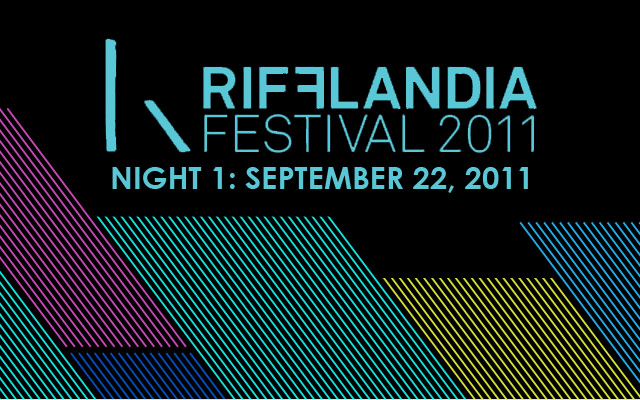 Last night was the first night of the 2011 Rifflandia Festival in Victoria, BC. As with all multi-venue festivals you can only see so much in a 4 – 5 hour period. I had a hard time picking who to see on teh first night mostly because I hadn’t heard of a lot of the acts on the night’s lineup. Here’s what I checked out.

Kim Churchill:
Kim Churchill is a singer-songwriter from Australia. I went to see him at the Wood Hall on the recommendation of a friend that he was an incredible guitar player. She wasn’t wrong. It was one of the most impressive performances of the night for me.

This was also the first time I’ve ever been inside the Wood Hall which is part of the Victoria Conservatory of Music. It’s actually quite a nice little venue with it’s stained glass and open floor setting with some church pews around the edges. The beginning of Churchill’s set was a bit of a surreal experience. I think it’s the first time in my adult life where I’ve gone to a concert and the audience was sitting on a carpeted floor, some cross-legged. What was this? Elementary school? Not that I was complaining. It allowed me to have clear line of sight for shooting video. After a couple songs people finally stood up. The only criticism I have about the venue was there was a little bit of feedback here and there, but it’s a small venue that was basically using PA speakers so it was bound to happen.

The Archers:
The Archers are young. Seriously, they’re all about 17-years-old. Their lead singer looks like he could be 12. Their sound is a little raw, but they’re heading in the right direction. There’s a reason this local alt-indie folk group was named the winner of BC’s Best Teen Band contest a few months ago. I only stayed for part of their set as I knew there might be some issues getting in to see the next band I wanted to check out, but what I heard/saw was good. Keep an eye on these guys as they continue to grow and gain experience as a band.

Here’s The Archers performing ‘The Sun Will Rise’:

Braids:
I honestly had never heard of Braids until Rifflandia kept buzzing about them on their facebook/twitter feeds. The Times Colonist listed them as their top 10 must see list for the festival… and apparently there was significant buzz about their performance in Toronto Gala for the Polaris Music Prize. So I went. and stood in line outside for about 30 minutes before their set with apparently a 10% chance of getting in. I kinda thought for a second that maybe the festival put the band in too small a venue. Luckily me and the other people who didn’t bail in the line got in just before the set started.

Experiencing this band for basically the very first time and from my observation (and I’m totally going to be burned at the stake for what I’m about to say by fans of all these bands), to me it was sort of like seeing a taller relative of Tegan & Sara with a vocal style sorta like Bjork and a band that has the atmospheric sound with songs that go on forever like a Sigur Ros. Hey, you compare with what you know right? Lead vocalist Raphaelle Standell-Preston was impressive despite her mentioning she had a bit of a cough. I liked their set and their sound and I’m glad I went, but I’m not sure if I would have checked them out if it hadn’t been in a festival setting. It’s probably just because I just don’t listen to this kind of experimental style music very often.

I full intended to only watch half of Braids’ set and then venture back to the Wood Hall to see We Are the City, but I kinda felt the need to stay for the full set at Braids. If the buzz for the band really takes off I wanted to make sure I had a full set audio bootleg recording in my back pocket.