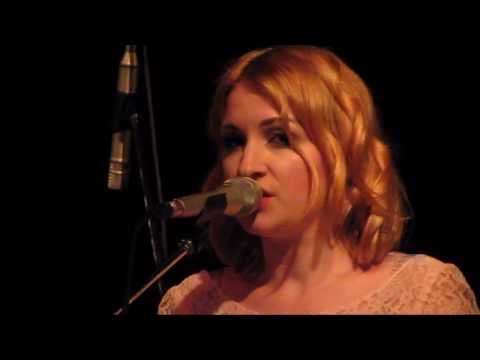 Night 3 was another one of those nights where you had to set priorities.  Melissa Auf der Maur and Sarah Harmer were definite priorities for me, and while I had hoped to see Chali 2na when the lineup was first released months ago his conflicting with Kate Miller-Heidke whom was performing at the same stage as Auf der Maur basically made my decision… That’s the biggest downside of multi-venue festivals. You can’t really jump back and forth easily when you factor in distance and lineups.

Being that the first two shows on my lists were at Market Square I decided to just check out the first act at 7:30 knowing nothing about him.  Rich Aucoin put on a visually interesting but weird show. It was like some audience participation techno youtube video music art.  There were balloons with happy faces, glow sticks, confetti, audience repeating song lyrics, Rich Aucoin frequently going into the audience while singing, him running around, random YouTube viral videos on the video screens… and a song performed where everyone is underneath a parachute and a strobe light.  Weird, but interesting. It seemed like something you’d see at a rave.  A lot of the younger people were in the crowd from what I observed from on the deck area.

Next was Australia’s Kate Miller-Heidke… We went from crazy raver music to pop/opera hybrid with just her on keyboards and her husband on acoustic guitar. For a girl who’s five foot nothin’, she’s got some pipes I tell ya.  On Friday afternoon she performed an acoustic set in the War Child lounge. So this was the second time watching her perform less than 48 hours. Her cover of Britney Spears’  ‘Toxic’ was fun. Honestly, it was probably a better sung version than Britney could ever do.  Another highlight was her performance of a song that went viral online. ‘Are you F*cking Kidding Me* is a song about an ex who tried to add her as a friend on Facebook. Really funny and vulgar lyrics coming from gentle sounding melodies. A great combo.

Here’s ‘Are You F*cking Kidding Me’… (warning: Not suitable for work or for young kids to listen to. )

So from dance music to pop/opera, it was time for some alternative rock. Montreal’s Melissa Auf der Maur (formerly from Hole and Smashing Pumpkins) took the stage a little after 9:30pm.  Now normally when you see a band the bass player is usually just in the background looking cool or doing something crazy… but when your bass player is also the lead singer it just amps up the cool factor. My problem was my vantage point near the stage was blocked by 2 tall guys’ heads. One guys head directly blocked my view of Melissa except for her head… and when I’m shooting video one of my key rules is that I need full view of the lead singer.  And this guy was like a tree. He didn’t move at all most of the show. But the problem if I moved left I’d be inhibiting some shorter girl’s view (and I’m mindful and courteous about this and refuse to blatantly step in front of someone  shorter than me)… and if I moved right I was blocked by tall guy #2.  You’ll notice the tall guys when I post more video from Auf der Maur’s set. Thankfully I was able to move to a position that with less obstacles by the end when ‘Followed the Waves’ was performed.  It was great to hear someone of her rock pedigree give a shout out to local modern rock station The Zone@91.3.

From there I hiked through the rain the 4 and a half blocks it took to get to Alix Goolden Hall for Jon and Roy. I managed to get there shortly after their set had started. There was definitely a party atmosphere in the normally stuffy feeling church hall. This is the 2nd time I’ve seen Jon and Roy live. They’re a fun folky rock band to dance too. Unfortunately venue people were stopping anyone who went anywhere near the stage to dance. How is dancing a fire hazard? I didn’t even know if we were even allowed to stand at our seats. That’s how restrictive it felt in the room. From a sound standpoint. I don’t particularly like it… mainly because on a recording standpoint it’s too live with too much echo for my taste. I end up with a lot of crowd noise. When I record I like really clean audio. Another thing I don’t like about the venue is the lighting. It’s an old church hall. It wasn’t built for modern concert lighting. There’s too much contrast.

Anyway, after Jon and Roy were denied an encore despite a rowdy crowd clamoring for one (again, venue officials being stuck up… I mean really. It’s an indoor venue holding relatively tame decibel levels. Why is there a 1am curfew?), it was time for Sarah Harmer. I’ve always wanted to see Sarah Harmer live. I find her to be a hybrid of Metric’s Emily Haines and Jewel. Great voice and solid song writing. She has a very friendly stage presence on stage too. The only thing that disappointed me about her set was that she didn’t play ‘Almost’…