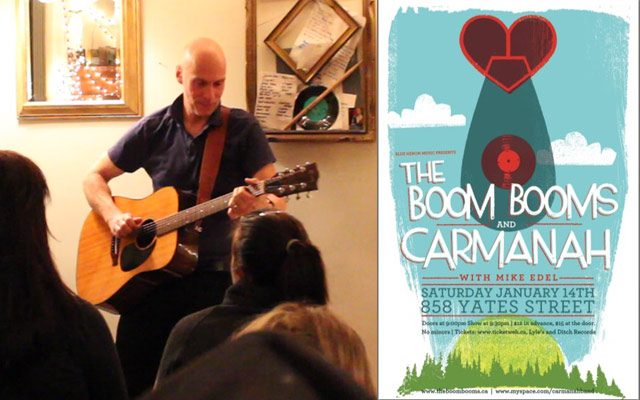 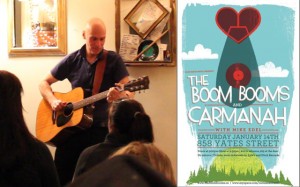 This passed weekend I had a slight dilemma. There no less than three shows I wanted to attend and I could technically only go to two. Georgia Murray was performing at Felicita’s Pub at UVic, only a five minute walk from where I live. John Mann, lead singer of Spirit of the West, was performing a house concert and East Vancouver’s The Boom Booms were headlining a show at Sugar Nightclub. I ended up going with the latter two simply because I had never seen either live before.

First up was John Mann. This was a house concert put on by The Victoria House Concert B. Andy Briggs, the organizer hosts acoustic shows at his home with a 60+ person capacity. Every cent raised from ticket sales go directly to the artist performing. The Facebook group has grown to over 500 members and members have seen the likes of Vince Vaccaro, Current Swell, Shaun Verreault of Wide Mouth Mason, etc. This John Mann concert was the 50th Andy has hosted and John Mann has performed on multiple occasions.

Saturday night he performed a mix of Spirit of The West songs, his past solo work and also some brand new songs that will be in a forthcoming album that centers around songs he wrote while battling rectal cancer. A great time was had by everyone at the show. John had some amazing stories to tell between songs including one that totally explains some of the lyrics in ‘Venice is Sinking’ (see video below). That particular story was hilarious.

After the house show I high tailed it down to Sugar Nightclub to see The Boom Booms with Mike Edel and Carmanah opening. Timing-wise, I thought I’d end up missing both openers, but I happened to only miss Mike Edel. Which was okay since I’ve seen Mike on many occasions. I arrived just as Carmanah started their set. Going in, I had never heard of, nor even heard any music by, Carmanah. Actually for the most part I was going to this concert at Sugar completely blind. I hadn’t even listened to much of The Boom Booms. I went to this concert simply because The Boom Booms were a finalist in the 2011 Peak Performance Project. I totally forgot the band placed 2nd in the whole competition behind Current Swell.

So I had no expectations walking in the door. What I stepped into was a packed sold out show with an opening band that kinda blew me away. Carmanah pretty much stole the show to me. According to their MySpace and Facebook pages, Carmanah are a 5-piece folk/rock band from Victoria. But within that you can hear some jazz and reggae influences. What struck me most from their set was the lone lady in the band. Laura Mitic plays fiddle, guitar, flute and has a flawless voice. The dance floor was full for this set. I think the floor might have had slightly more people there for this set than the headliners. It’s probably because of the home town advantage, but still… an opening band filling the floor with people jumping and dancing definitely tells you there’s something special about the band. They even performed a two song “encore”.

I think the only problem the band ran into was a little bit of feedback sneaking in during a couple songs. Another surprise highlight of the performance for me was when they performed a song that I later found out was called ‘Coachella.’ The song was so timely considering the Coachella Music & Arts Festival announced their lineup and sold out in 3 hours last week. When the band broke out in the song’s chorus all I could think was “are they actually singing “Coachella” in this song?” Yes… Yes they were… I don’t know if the song is about the festival, but it sure got me thinking about it and how I’m going for the 6th time.

Next up were the headliners, The Boom Booms. If I had to describe the band I would say it would be like mixing the vocals of Kings of Leon’s Caleb Followill with the ensemble sound of Ozomatli. Seriously, the lead singer’s voice sounds like Caleb Followill at times. The Boom Booms were fun to watch. A mix of rock, latin, and raggae music with some artist participation thrown in. I totally see why they made the top 3 in the Peak Performance Project. The got the whole dance floor to crouch on the ground at one point. You can’t get an audience to do that if you suck. Unlike many bands where there’s one or two members that command the most attention while others are just hidden in the background, each one of this six person group seemed to have moments in the spotlight.

This show at Sugar is a prime reason why people should go to local concerts even if you haven’t really heard of bands on the card. You just might discover something you like. Besides… tickets for this show were $12! That’s less than a movie which I’m sure many have paid more for to suffer through some really terrible movies.

Speaking of local concerts. Go to see Steph Macpherson & Redbird at Lucky Bar on January 21, 2012. That show is $7! That’s less than ONE BEER at Irish Times or the Bard & Banker. Seriously, you will not be disappointed.